What the Eiffel Tower is to Paris or the Statue of Liberty is to New York, the soaring spires of the Sagrada Família are to Barcelona. Nothing prepares you for the impact of the Sagrada Familia. A tour de force of the imagination, Antoni Gaudí´s church has provoked endless controversy. It also offers visitors the unique chance to watch a wonder of the world in the making. The church is a must see in Barcelona.

This contraption is testimony to Gaudí´s ingenuity. He made the 3D device using chains and tiny weighted sacks of lead pellets, as a model for the arches and vaulted ceilings of the Colonia Güell crypt. No one in the history of the architecture had ever designed a building like this

These helicoidal stone stairways which wind up the bell towers look like snail shells.

For a close-up look at the mosaic tiling and gargoyles on the spires the the lift up inside the bell tower for views that are equally spectacular.

Gaudí´s love of nature is visible in this facade. Up to 100 plant and animal spices are sculpted in stone, and the two main columns are supported by turtles.

This Josep Subirachs facade represents the sacrifice and pain of Jesus. The difference between the gothic feel of Subirachs´ style and the intricacy of Gaudi’s work has been controversial.

The intense central body of the church, now complete, is made up of leaning, tree-like columns with branches that are sintered by a banana tree spreading out across the ceiling: the overall effect is that of a beautiful stone forest.

Travel tip… For the best photos, get here before 8am; the light on the Nativity Facade is excellent and the tour buses have not yet arrived.

In the only cloister to be finished by Gaudí, the imagery is thought to be inspired by  the anarchist riots they began in 1909. The Devil’s temptation of man is represented by the sculpture of a serpent wound around a rebel.

Adorned with lizards, serpents and four gigantic snails, the apse was the first section of the church to be completed by Gaudí.

Gaudí now lies in the crypt, and his tomb is visible from the museum. Using audio-visuals exhibits the museum provides information about the construction of the church. the highlight is the maquette workshop, producing scale models for the ongoing work. 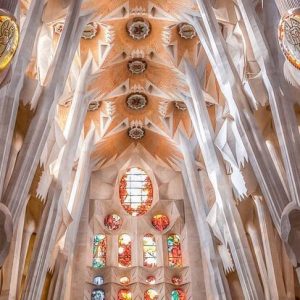 Travel tip… In the cryptogram on the Passion Facade, the numbers add up to the age of Christ at his death.

Over the last 90 years, at incalculable cost, sculptors and architects have continued to build the Gaudí´s dream. Now financed by over a million visitors each year, it is thought the project will be complete by 2026, the 100th anniversary of Gaudí´s death. The church buzzes with activity: sculptors dangle from spires, stonemasons carve huge slabs of stone and cranes and scaffolding litter the site. Observing the construction in progress allows visitors to grasp the monumental scale of the project of Sagrada Família.